Last Christmas, my wife and I spent twelve days in New York. We only just began to scratch the surface of The Big Apple, but I thought I’d suggest twelve things to do if (although that should definitely be “when”) you visit NYC:

12. Stay in a hotel that shares your initials. 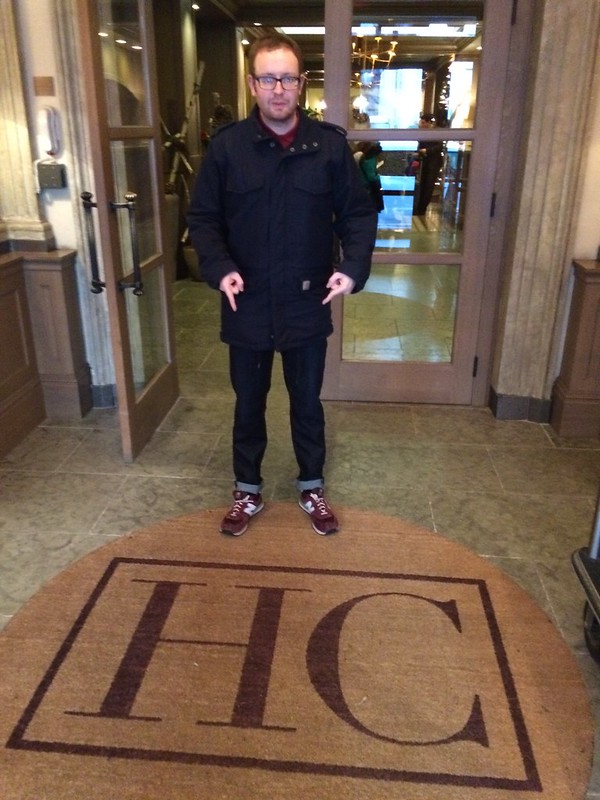 We stayed at Hotel Chandler (because Friends) and it turned out to be a great choice. Courteous staff, prime Manhattan location (literally a stones throw from the Empire State Building) in Midtown and free refillable hot drinks in reception.

Our room was small – the “intimate seating area” was pretty much just a chair in the corner – but it’s New York. Most hotel rooms are small.

We booked Hotel Chandler through Expedia UK and would definitely recommend it to anybody heading to New York.

11. Get a coffee from Stumptown Roasters.

Buddy The Elf should have popped into this place – the best Macchiato I’ve ever had! Great job everybody.

10. Pretend you’re a Pterosaur in the American Museum of Natural History.

If you want to understand the pterosaur, first you've got to be the pterosaur. #NYC #nhm #dinosaur #jurassicpark

9. Go on The Sopranos tour.

Everybody knows that The Sopranos is the greatest TV programme ever made, so why not go on a tour of locations that featured on the show?

Enjoy some onion rings in Holsteins, have a beer in the Bada Bing (which is an actual real life, fully functioning strip club called Satin Dolls) and if you want to, buy some memorabilia out of Vito’s (aka actor Joseph Gannascoli) car-boot.

As the famous Christmas song (nearly) goes, “Well I wish I could eat Pizza everyday” and to be perfectly honest, I probably did when we were in New York. Highlights included Joe’s, Don Antonio and Artichoke Basille’s.

7. Go up the Empire State Building.

Some people say if you go up to the Top Of The Rock, you don’t need to go up the Empire State Building and vice versa. Well, we decided to go up one of them at night and one of them during the day. I’ve seen worse views…

Why not take a ‘Top Of The Rock’ Christmas Day selfie?! That’s exactly what we did and then we followed it up with a surprisingly great Christmas Dinner at the Rock Center Cafe next to the famous ice rink… where we witnessed a hat-trick of proposals. Festive.

There’s so many great bars and brilliant breweries in New York, so I guess it’s no surprise that we managed to enjoy a pint or two!

If you’re a fan of craft beer, make sure you head to Beer Culture in Hell’s Kitchen. A phenomenal selection of beers and really friendly, informative staff. Even though you’re not far from Times Square, it feels very much like a “locals” bar – but not in an unfriendly way to tourists.

Advance warning: there’ll almost certainly be somebody there playing some Beatles songs on a battered old acoustic guitar. If you’re lucky, they might actually be quite good…

3. Accidentally end up in a Japanese izakaya.

This particular place is Village Yokocho in East Village. We ended up in here after we’d been for some cocktails in the speakeasy (Angel’s Share) next door and it didn’t let us down! The food was astounding, the Sake awesome and the atmosphere amazing.

2. Take a walk over Brooklyn Bridge.

Not only will it provide you with some much needed exercise to help work off all of that pizza, but the views are pretty decent too:

1. Treat yourself to some delicious cocktails.

I should probably do a whole new post just for cocktails in New York, but until then – I’ll let you know about a few of our favourites!

Flatiron Lounge (37 West 19th Street, Flatiron District) – we loved it here. You need to go and you need to try a Maple Leaf – unreal. They also served up the best Old Fashioned I had in New York.

It was once a secret, but after a plethora of press and a host of awards, it’s not particularly secretive anymore – although the fact that it’s pretty well hidden and only accessed via an unmarked door does still cause some confusion for first timers like us!

The Campbell Apartment (15 Vanderbilt Ave) – located in a secluded corner of Grand Central Station, the calm and eloquent nature of this exquisite bar feels a world away from the hustle and bustle of the station terminal.

The “Prohibition Punch” is well worth sampling – the fact that it’s topped up with Moet at your table is a nice touch, although I’m not sure that’s how they would have served it during the Prohibition era!

What places would your recommend in New York? We’ll definitely be on the lookout for some more awesome cocktail bars next time we visit!

Check out my New York album on Flickr for more photos.